A- A  A+
News from EUROMARFOR
Back to previous page
June 21, 2011
Euromarfor Task Group Activation Ceremony for CONTEX/PHIBEX

First of all I would like to express my appreciation for your presence in this ceremony and a special and warm welcome to Lisbon for the crews of the French and Spanish ships.

We are here today to activate the European Maritime Force (EUROMARFOR) for the second time in this year 2011 and, most probably, the last activation under my Command period, as I will handover to my French colleague on the 15th of September.

After sixteen years of activity, completed last May on the 15th, EUROMARFOR has come to be considered as an effective coalition of our four nations, united by the common purpose of contributing for a better and safer world. During that period of time, the force was deployed in three different Real World Operations for about 42 months, building up a reputation of maturity and reliability.

Since our foundation the strategic environment has changed dramatically. Therefore, the framework under which we operate, the "Petersberg Missions', although still valid, requires broadening to face new, and unpredictable, challenges and threats, imposing an holistic approach at both politically and military levels.

Such approach will only succeed if assuming cooperation as the corner stone, amongst forces, organizations or states. Our presence is a good example of such spirit. Taking advantage of the inherent attributes of naval forces such as, mobility and flexibility, we are here to exercise and strengthen our skills, in order to provide political decision makers with a unique and capable tool: that is to say, a Naval Force ready to serve in a wide array of tasks, being them in the military dimension, in law enforcement, in supporting disaster relief and humanitarian aid, or in military cooperation. This Naval Force will be fitted to operate by itself or with other organizations and agencies, extending to them the seaman's spirit of solidarity, as well as contributing for building trust, confidence and security.

As Naval Commander for the Portuguese Navy and as COMEUROMARFOR it is a honour, and a privilege, to have both Forces under my command. CONTEX/PHIBEX covers a wide array of naval warfare disciplines. As we all know, while current real world naval operations are of limited intensity, we have to keep aiming at maintaining higher standards of readiness and warfare skills. Therefore the exercise was blended accordingly, covering a wide range of balanced tactical situations, providing opportunities for a demanding and balanced training throughout.

This force activation is just one more event that will contribute to improve our readiness and our interoperability, but also and chiefly a moment for reaffirming the cohesion and determination of our nations in promoting a common ideal of peace and goodwill among human beings.

I conclude expressing my best wishes to the Task Group Captain and his multinational staff, to the Commanding Officers and ships companies of the French Destroyer DE GRASSE, the Portuguese Frigate BARTOLOMEU DIAS and the Spanish Frigate NAVARRA. Take advantage of this opportunity to increase your professional skills and to better know each other, showing with pride your National and EUROMARFOR Flags on your masts.

Finally, as directed by the EUROFORCES High Level Inter-ministerial Committee (CIMIN), I have the great pleasure to declare activated this EUROMARFOR Task Group, under the command of Captain Jorge Costa e Sousa as COMMMANDER OF THE EUROMARFOR TASK GROUP (COMGRUEUROMARFOR), to whom I delegate the Tactical Command over the Task Group.

Wish you all fair winds and following seas. 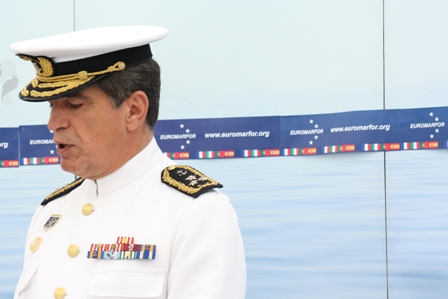 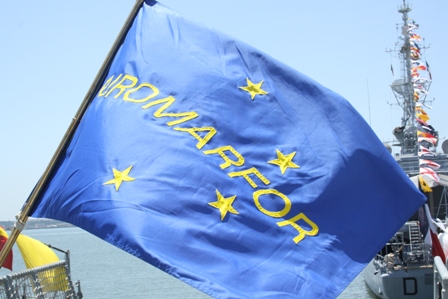