A- A  A+
News from EUROMARFOR
Back to previous page
June 17, 2018
ITS SCIROCCO integrates EMF TG in Lisbon

Nave Scirocco, a frigate belonging to the Venti Class, was launched on April 17, 1982, in Riva Trigoso Shipyard (GE) and delivered to the Navy on April 28, 1983.

123 meters long and 12.9 meters wide, Scirocco has as the usual port of assignment La Spezia, inserted in the First Naval Division.

The activity of Nave Scirocco has been, since its entry in the Naval Squadron, mainly characterized by a multinational employment.

The Unit has been part of the NATO Naval Force in the Mediterranean Sea on several occasions (NAVOCFORMED in 1986 and 1991, STANAVFORMED in 1997, 1998, 2002 and 2005) and that of the Western European Union, during the embargo operations towards the Republics of the former Yugoslavia (in 1992 and 1993). Nave Scirocco has also operated to guarantee freedom of navigation and protection of Italian merchant ships in the waters of the Persian Gulf, following the Iran-Iraq conflict (1987) and to support peace in the context of operations Somalia 2 (1994), Decisive Enhancement (1996 IFOR) and Determined Guard (1997-1998).

In 2004 ship Scirocco was located for about five months in the Persian Gulf and the Red Sea, by participating in the European naval force EUROMARFOR, Operation Resolute Behavior IV (in support of Operation Enduring Freedom), playing an intense activity of control of merchant traffic (117 inspections on merchant ships, fishing boats and boats in about 5 months).

From 2005 to 2007, Nave Scirocco, first among the Units of the Mistral Class, underwent a substantial modernization of the Combat System and the Platform System, which align its technology and capabilities with the most recent military Naval Units, also guaranteeing a significant extension of its operational life.

In 2008 and 2009, the unit took part in the UN mission interdiction of maritime traffic during the crisis in Lebanon (UNIFIL) and in 2010 to the NATO Operation ACTIVE ENDEAVOR (control of merchant shipping in the Mediterranean Sea) and OCEAN SHIELD (opposing to piracy in the Indian Ocean and the Horn of Africa).

In 2012, the unit is back in the Indian Ocean waters for taking part in Operation EU "Atalanta" for the protection of international maritime traffic from piracy, sailing more than 31,000 miles and persisted into the box operations for more than 175 days.

Since 2013, the Unit has been included in the airship device for humanitarian relief to migrants coming from the African coasts as part of the "Mare Nostrum" operation.

In 2017 and 2018 Nave Scirocco has been repeatedly called to operate within NATO being inserted within the OSG "Operational Sea Guardian" TG in which they were mainly carried out surveillance activities, the fight against terrorism and the development of regional maritime capacities.

Nave Scirocco, as demonstrated by the many activities carried out, has shown not only great flexibility of use but also the possibility of providing different types of support / services, making it suitable for operating in diversified environments. The Unit has performed, depending on the assigned missions, in addition to its natural role carrying out purely military tasks, especially in the ASW (Anti-Submarine Warfare) sector, the functions of:

1) Complex Command Headquarters Unit: following the modernization works, a STAFF-ROOM has been set up where a boarded staff can operate, with the ability to manage, thanks to satellite and computer skills, any complex event of a purely military and non-military nature.

2) Health support unit: with a hospital area equipped for first aid (role1 of the NATO classification) an immediate treatment is guaranteed to stabilize the injured. Moreover, the air capacity on board allows a quick transfer of the most needy to more equipped centers. 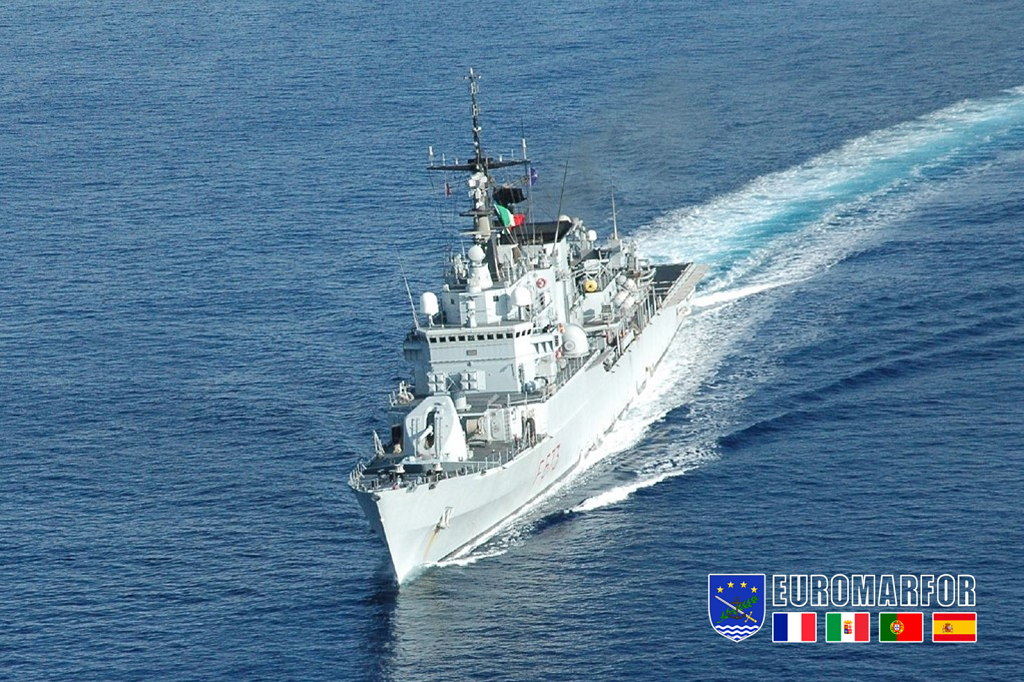