A- A  A+
News from EUROMARFOR
Back to previous page
May 15, 2019
EUROMARFOR celebrates 24 years at sea for peace

In June 1992, with the Petersberg Declaration, the WEU began the process of revising its structure to adapt itself to a changing world and for this reason to update the list of potential missions that could be assumed. Consequently it was the requirement to identify the Forces necessary to carry out the new missions that came into force. The governments of the four nations that were later to establish the EMF, were very quick to process and assess the importance of the message sent with the Petersberg Declaration. In fact, as soon as the following September, during a meeting of ministers, they stated their willingness to create a Multinational Maritime Force. This was the starting point of the work that would later lead to the signing of the EUROMARFOR Constitutive document in Lisbon on 15 May 1995.

The 15th May 1995 France, Italy, Portugal and Spain committed their navies to come together constituting the European Maritime Forces. This happened on the sequence of the Petersberg Declaration, when the Western European Union (WEU) began the process of revising its structure to adapt itself to a changing world and for this reason to update the list of potential missions that could be assumed.

EUROMARFOR or EMF was therefore the answer the requirement to identify the Forces necessary to carry out the new missions that came into force with the subscription of the consitutive document in Lisbon. EUROMARFOR structure is based on the concept of a non-standing but pre-structured force, which makes it very flexible and efficient as it provides an alternative for operational planning and keeps the costs at a reasonable level.

EMF was activated for the first time in 1996, during the EUROFORCES EOLO exercise, and on the 1st of October 2002 for its first Real World Operations, with Operation Coherent Behaviour (OCB) in the Eastern Mediterranean, to contribute to the Global Fight against international terrorism.

Following a biannual rotation, the EMF are now under Portuguese Command and the HQ is in Lisbon where the COMEUROMARFOR, VADM (PRT N) Henrique GOUVEIA e MELO, has his operational headquarter.

From here, the Commander of EUROMARFOR (CEMF) will be ready to conduct a rapid integration of the assigned Force and the subsequent early establishment of a maritime capability, with a special focus but not limited to the Mediterranean Theatre and its approaches.

The primarily support goes to the EU and NATO  security and defence requirements in the maritime domain by means of:

-  Cooperative Security. Including all operations to contribute to prevent conflicts and develop regional security and stability through dialogue, confidence-building, and increased transparency.

-  Maritime Security. Including all operations to contribute to the maintenance of a secure and safe maritime environment making sea and waterways safe and secure for all users.

Since the foundation EMF task group have been activated for 40 time including real world operations, training and cooperation with partners in Mediterranean Sea and approaches widely considered. 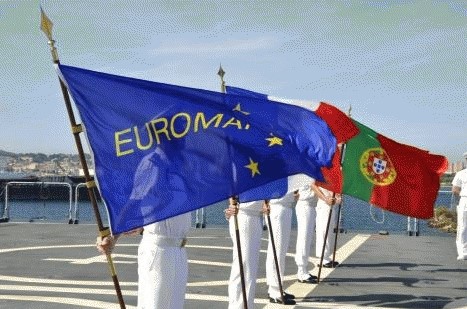