A- A  A+
News from EUROMARFOR
Back to previous page
September 15, 2009
Speech of EUROMARFOR Commander at Change of Command Ceremony

Commanding Officers and Ships companies of the EUROMARFOR units

I express my deepest gratitude for your attendance to this ceremony and your presence is an honour showing the high esteem earned by EUROMARFOR among our nations and also throughout the international community.

Fourteen years ago, here in Lisbon, in a place not far from where we stand today, the representatives of our governments signed the constitutive document of the creation of EUROMARFOR.

This initiative had a goal, to give birth to a maritime force able to contribute to the European Security and Defence Identity in cooperation with NATO and all allies, to accomplish important missions such as humanitarian and rescue operations, peacekeeping and combat missions in crisis management including peacemaking.

This was the spirit of the foundation, building a naval force ready to accomplish autonomous or multinational operations, through a rapid and effective response to the world emerging crisis in support of international initiatives for peace and stability.

Since then, EUROMARFOR grew fast and became a history of success, with thirty one activations, more than three years deployed in real world operations and numerous exercises and other activities including cooperation with the south Mediterranean countries. I can assure that currently EUROMARFOR is a mature and experienced force.

I must recall the wide activity at sea in operations like COHERENT BEHAVIOUR in the oriental Mediterranean, RESOLUTE BEHAVIOUR in the Indian Ocean and IMPARTIAL BEHAVIOUR off the Lebanese coast. The force showed then and now the flexibility, readiness, ability to operate either under mandate of own nations, Europenean Union, United Nations or any other international organization or coalition when and where needed.

I am proud to take today the commanding responsibility of this force and I can assure that I am committed to follow for the next two years the path of my predecessors in this job, following the directives of the EUROFORCES Interministerial Committee.

This means that our navies need to keep the force with high operational standards and ready to be deployed to real world operations, accomplish the approved training plans, strength the relations with the European Union mainly through their military staff and also cooperation with NATO as well as the navies of the South Mediterranean countries by means of the scheduled multi-cooperative exercises.

In this sense and on my national duty as COMNAV, I have the responsibility to stand ready with a frigate to NATO SNMG 1, currently deployed in the Mediterranean Sea with the Portuguese flag officer embarked until January 2010 and a second one to EUROMARFOR. Experience proves that frigates are also efficient and flexible ships to deal with pirate assaults, and my navy had already twice this year events with successful outcome. I must emphasise that this is of extremely importance, taking in consideration the on going operations off Somalia coast, against piracy, either the NATO operations or the European operation ATALANTA. I do have the necessary assets with forty height hours notice to sea, standing ready for any decision taken by the CIMIN.

I am pleased to have an outstanding international staff working from now on with me in the Permanent Cell, with representatives from the four nations, but also with two officers from Greece and Turkey, integrated in the same spirit to fulfil the objectives of EUROMARFOR.

I wish also to thank to the navies, to the commanding officers and crews of the EUROMARFOR ships the effort done to be present here today. You are representing all EUROMARFOR ships and crews who, in behalf of our four nations, were sailing the force flag for the last fourteen years.

Today, taking over this command responsibility from Vice Admiral Binelli Mantelli, my dear friend Luigi, I would like to express my gratitude to you and the Italian Navy, for the hard work during these two years to have such a strong and credible fleet ready to be employed against the current threats to the peace in the world.

Many thanks to all. 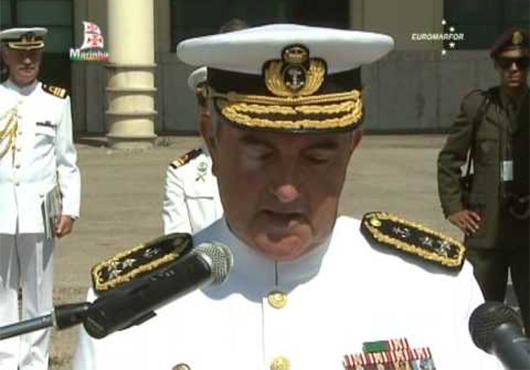