October 12, 2015
COMEUROMARFOR and the EMF Permanent Cell, by the occasion of a working meeting

COMEUROMARFOR and the EMF Permanent Cell, by the occasion of a working meeting. Spanish warship, ESPS Victoria, has joined Operation Atalanta, the European Union’s counter-piracy operation off the coast of Somalia. She departed her home port in Spain on September 10.

ESPS Victoria is a Santa María class frigate. Built in Spain, her design is based on the US Oliver Hazard Perry class frigates, which were designed to act as an escort to aircraft carriers and other high value ships, as well as to conduct anti-submarine patrols. Their extensive capabilities also allow them to carry out a wide range of other missions, such as counter-piracy operations. October 08, 2015
Italy took over the Force Command of Operation Atalanta from Spain Five and a half months after departing from her home port of Rota, Spain, the Spanish Landing Platform Dock (LPD), ESPS Galicia, has completed her counter-piracy deployment with Operation Atalanta in the Gulf of Aden and Indian Ocean.

ESPS Galicia, under the command of Captain Rafael Fernández-Pintado Muñoz-Rojas, joined the EU operation on 6th May 2015 and by the time she returns to Spain, she will have been away for 155 days. 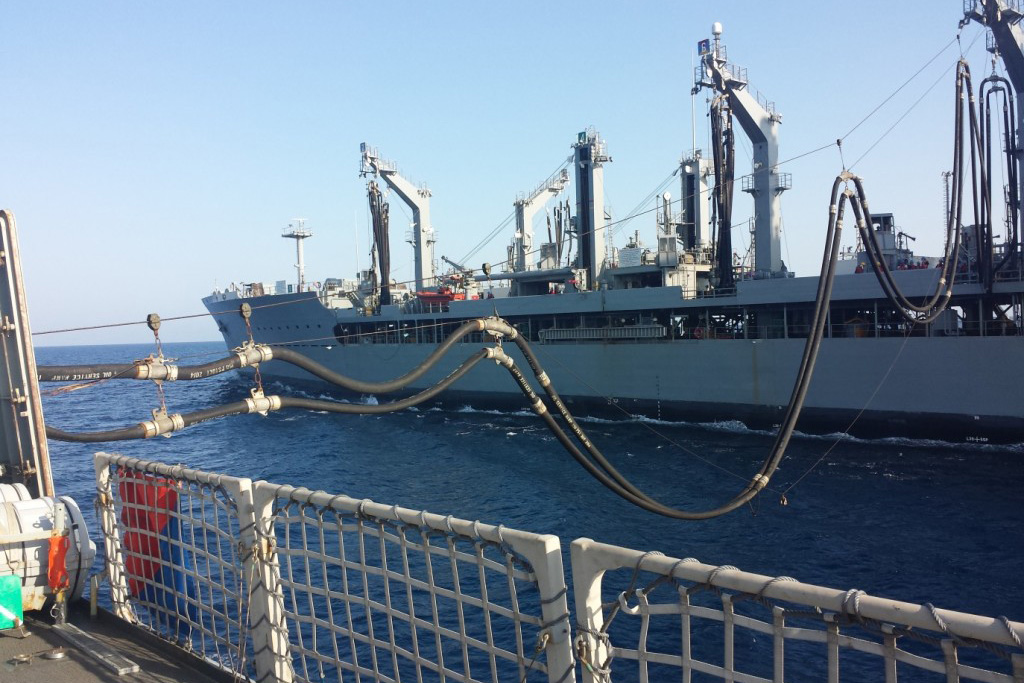 October 03, 2015
All the Spanish Naval Units of the European Union Naval Force meet at sea in the Gulf of Aden

On the morning of the 3rd of October, three Spanish units currently deployed to fight piracy activity and protect all the vulnerable shipping transiting the Indian Ocean met up in the Gulf of Aden. ESPS “Meteoro” joined ESPS “Galicia”, flagship of Operation Atalanta, and ESPS “Victoria”, after these last two ships had performed a simultaneous refueling at sea in the Gulf of Aden. During the last counter piracy patrol of the ESPS “Galicia”, the Force Commander, Rear Admiral Gómez de Cordoba, who is embarked on the Spanish flagship has paid a visit to the ITS “Libeccio” and to the Lithuanian Autonomous Vessel Protection Detachment on board the World Food Program Vessel “Douro”. On September 30th Spanish Warship ESPS “Meteoro” (P-41) performed several activities at sea focused on improving knowledge of the pattern of life in the Somali Basin and also on cooperation among EU countries. 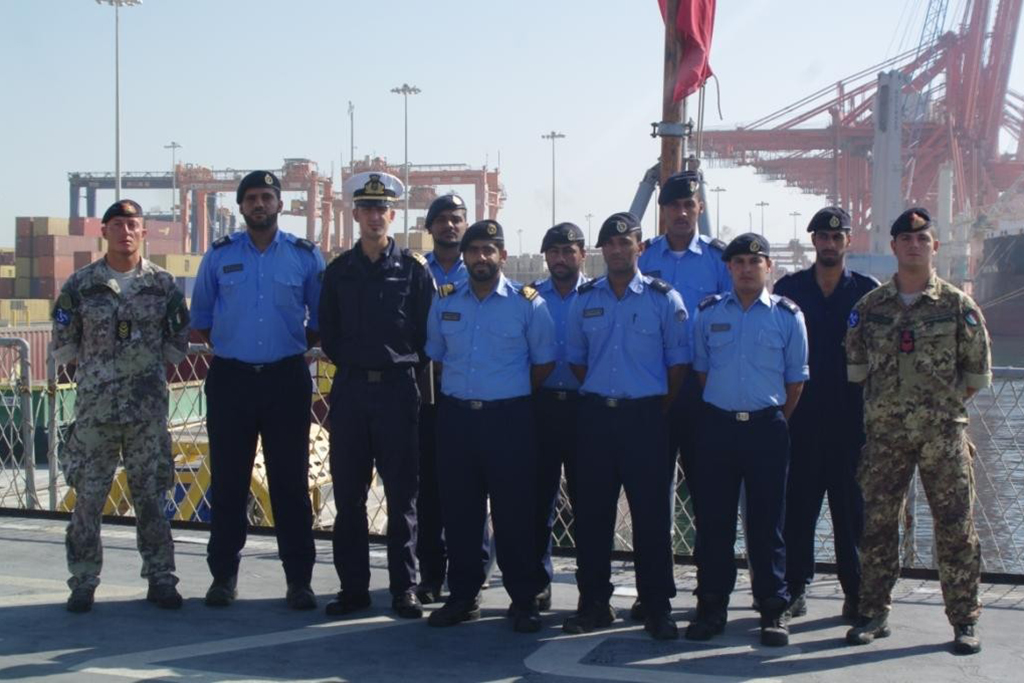 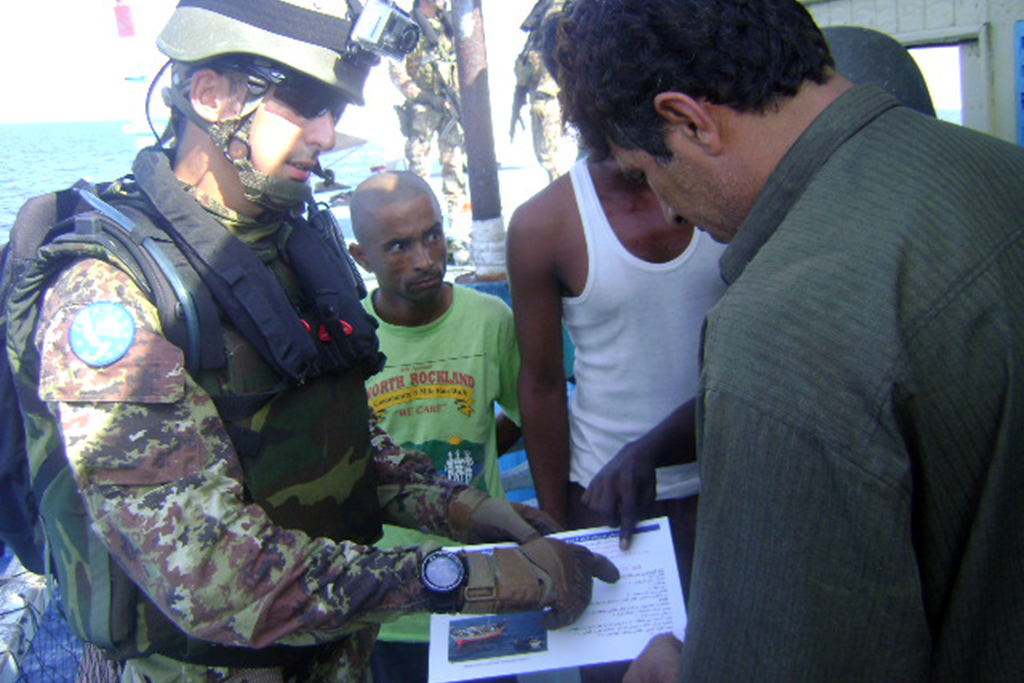 September 25, 2015
ITS Libeccio performs two friendly approaches off the coast of Somalia

On the 25th September ITS “Libeccio”, after an intense monitoring of maritime traffic in the Somali basin, spotted several fishing dhows, typical fishing vessels that sometimes can hide illegal activities related with supporting piracy. 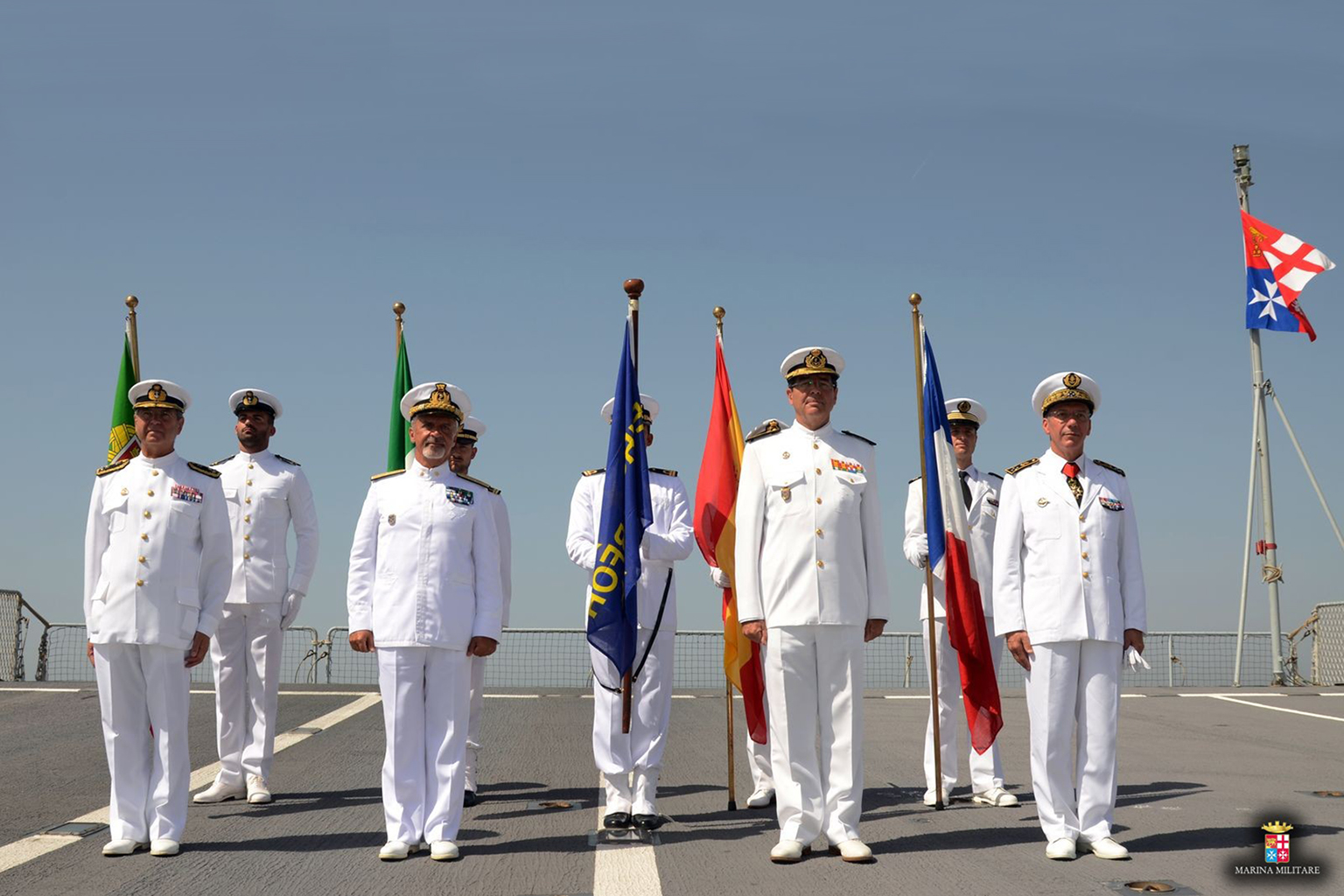 September 17, 2015
Italy has assumed the operational command of the European Maritime Force (EUROMARFOR)

The Change of Command Ceremony (CoCC) took place on board of the Italian Navy warship  Giuseppe Garibaldi, in the Naval Base of Taranto and was chaired by the Italian Chief of Defense, General Claudio Graziano.

Admiral Fernando García Sánchez, the Spanish Chief of Defense and the Portuguese Lieutenant-General Sílvio Sampaio, representing the CHOD, were present among others several diplomatic, military and local authorities.

Greece and Turkey, the two nations having officers as observers in EUROMARFOR Permanent Cell, were also represented in the ceremony at diplomatic and military level.

Change of Command of EUROMARFOR On Sunday 6th September 2015, the EU Naval Force counter-piracy flagship, ESPS “Galicia”, provided urgent medical assistance to an injured seafarer, who had suffered a flattening on his hand during a fishing campaign on the Atlantic Ocean on board the Spanish fishing vessel “Jai Alai”. The helicopter from “Siete de Agosto”, Altair, transferred a small group of crew members to “Meteoro”, so they could know this ship and her capabilities. After some explanations about the main characteristics and the typical exchange of gifts, the helicopter took off and performed a photographic report while both ships sailed together.

Finally, “Siete de Agosto” reassumed her route towards the Gulf of Aden, while “Meteoro” kept her course southwards heading for her next task. It has been an excellent chance to tighten bonds between these two countries that have so many things in common, including historical background; two nations so geographically apart but now so close at sea keeping this area of the world safe. 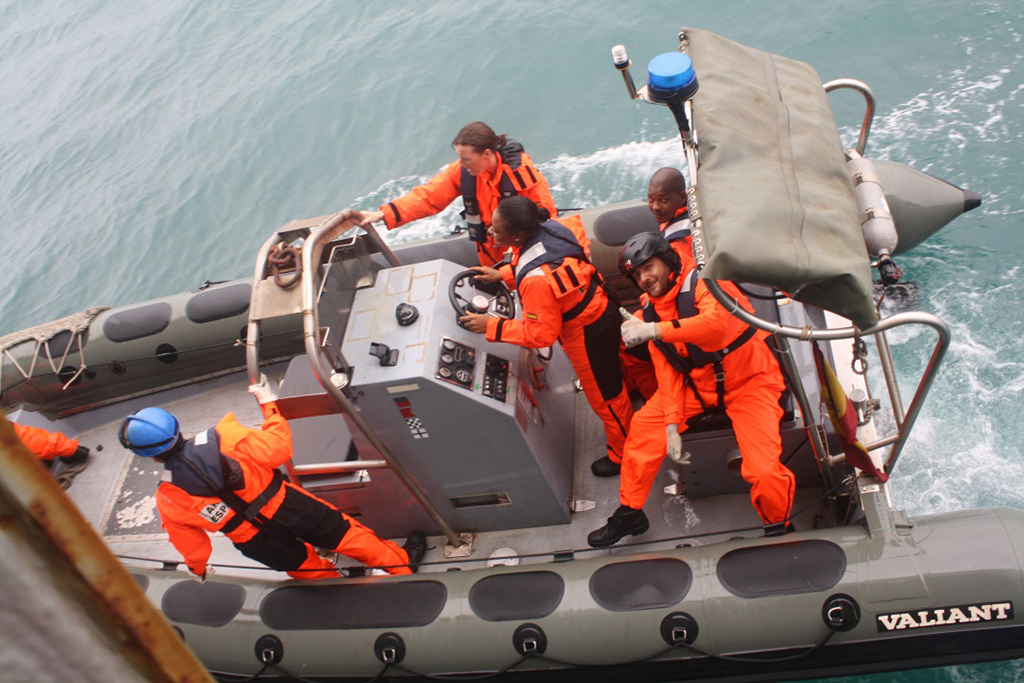 During the 3rd of September’s morning, as part of the on-going Local Maritime Capacity Building program, practice-led training was carried out by Spanish sailors.

Local practice beneficiaries mentored by British-led initiative, made the most out of the two hour training frame, which got on to a remarkable start as the weather provided shifty atmospheric conditions. 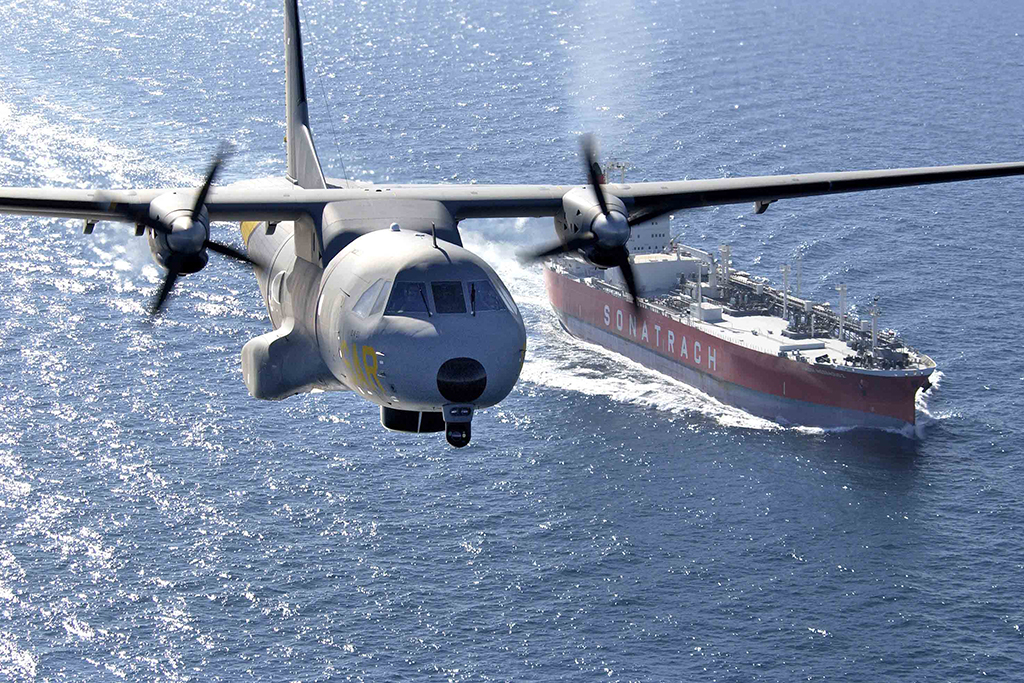 August 27, 2015
The Spanish D-4 Aircraft, a key asset to the Operation Atalanta

From the very beginning of the ATALANTA Operation, Spain has shown a firm commitment to fight and eradicate Somali-based piracy and armed robbery at sea, off the Horn of Africa and in the Western Indian Ocean.  Its main air asset is currently the D-4, which is the MPRA (Maritime Patrol and Reconnaissance Aircraft) version of the CN-235 transport aircraft. Just after the end of the replenishment at sea with USNS “John Ericsson”, the Operation’s “Atalanta” Force Commander was flown with the Spanish SH3D helicopter to visit the German Warship FGS “Erfurt”. 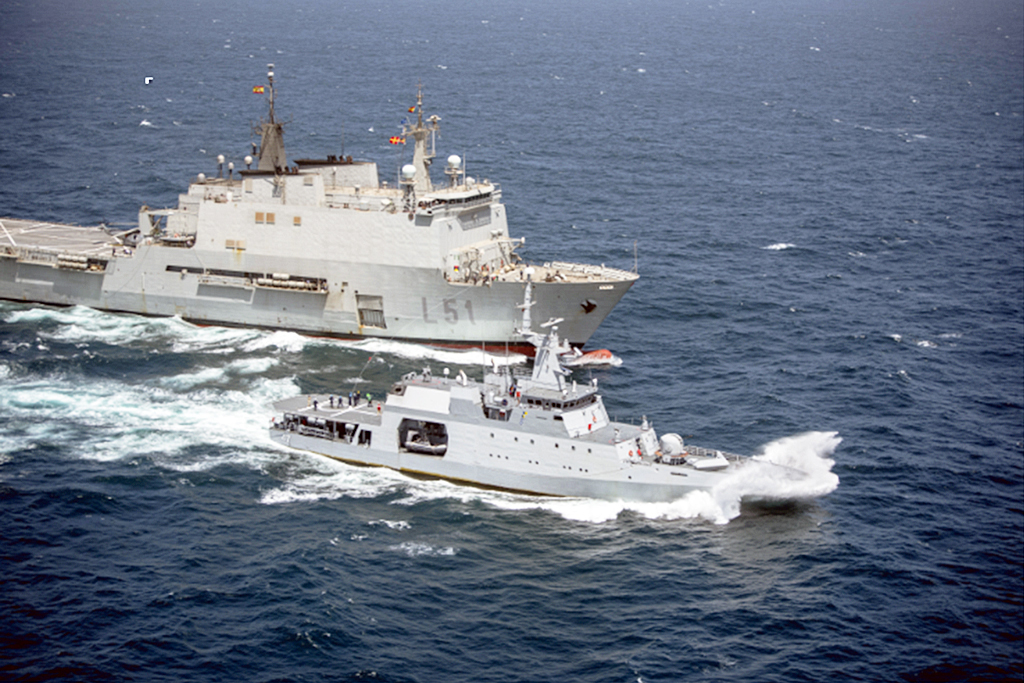 During a counter piracy patrol on the Gulf of Aden, the Spanish Warship “Galicia” encountered at sea the Colombian Warship “7 de Agosto.

On the morning of the 22nd August, a crew members exchange among the two Warships, ESPS “Galicia” and ARC “7 de Agosto” was scheduled. In spite of all activities programmed for the encounter at sea, only the Force commander and staff members were able to visit the Colombian Warship due to the strong southwesterly winds blowing on the area.

During the encounter, the two warships performed light weight replenishment at sea to exchange some traditional gifts of the two countries. The passenger exchange was executed with the Colombian helicopter Augusta Bell 412. During the visit to the Acting Commander of the Royal Omani Navy, they could share some talks about the current piracy situation on the Indian Ocean and the Gulf of Aden and about the maritime security situation in general.