A- A  A+
Back to previous page
FORCE COMMANDER

In July 1985, he graduated as Second Lieutenant.

He was promoted to Lieutenant in July 1988 and assigned to the Fleet Tactical and Training Program Center, where he was responsible for the "Principe de Asturias" aircraft carrier combat system software, and to the Fleet Evaluation Center (CEVACO) as head of the Above Water Warfare (AWW) branch. He spent almost four years on board Frigate "Santa María" taking part in the KUWAIT Liberation War in 1990, as well as in exercises, operations and deployments with NATO'S Standing Naval Forces (STANAVFORLANT and STANAVFORMED). On board this ship, he served as Navigator, Communications, C.I.C. Officer, Electronic Warfare Officer and Tactical Action Officer (TAO). As Lieutenant, he commanded Fast Patrol Boat SPS "Laya".

In July 1997, he was promoted to Lieutenant Commander. As LTCDR, he took the Naval College Staff Course and then served as Chief of Staff on the 41st Frigate Squadron, Santa María Class Frigates (1998-1999). In the year 2000, he worked as Staff Operations Officer (one year tour) for NATO's Standing Naval Force in the Mediterranean (STANAVFORMED). When he returned from STANAVFORMED and after spending three months in the Operations Branch (N3) of the Spanish Fleet HQ, he took command of Corvette "Vencedora" with which he participated in "COHERENT BEHAVIOUR" (an operation integrated into EUROMARFOR) as well as several national and NATO exercises. He ended his command in October 2002 and was then assigned to the Military Cabinet of the Minister of Defense.

He was promoted to Commander on July l, 2004, and thereafter was appointed to the N3 Division of the NATO Maritime Component Command (MCC) Staff in Northwood (U.K.), where he dealt with all NATO Response Force issues, operational planning and maritime situational awareness. In September 2007, he took command of the Spanish Navy AEGIS-Area Air Defense Frigate "Mendez Nunez". During this command, he was deployed to the Indian Ocean integrated into the Royal Navy ORION-08 Task Group. He also conducted anti-piracy operations off the Somali Coast and took part in several NATO (NRF preparation) and national exercises.

In April 2009, he was posted to the Spanish Navy General Staff as Branch Head for Strategic Plans (in the Plans and Policy Division), where he was promoted to Captain. After the Navy evaluation process, he was designated to command the SNMG-2 during the Spanish rotation scheduled June 2013 to June 2014. On May 26, he was temporarily promoted to Rear Admiral and on June 15, 2013, he assumed command of the SNMG-2 until July 2014. During his command, he was deployed six months in the Mediterranean and Black Sea, mainly dedicated to Operation Active Endeavour and NRF Certification, as well as seven months in the Indian Ocean and Persian Gulf, where he assumed duties as CTF-508 (NATO Anti-Piracy Operation Ocean Shield). Once he finished his NATO command, he was assigned as Chief of the Cabinet of the Spanish CNO (AJEMA).

On February 23, 2021, he was promoted to Admiral (OF-8) and assigned as the Admiral of the Spanish Fleet.

Eugenio Diaz del Rio is a specialist in Naval Combat Systems Software, a Tactical Action Officer and a Naval War College graduate. He has been awarded with two Grand Crosses; six Crosses of Naval Merit; the Military Merit; the Air Force Merit; the Guardia Civil Merit; the Cross of Saint Hermenegildo and two foreign medals: Kuwait Liberation Medal and the Naval Medal of the Republic of Chile; and two NATO Medals (Active Endeavour and Africa). After his job as Chief of Staff of the Allied Maritime Command he was awarded the “NATO Meritorious Medal”.

He is married to Amparo Sotelo and they have five children and three grandchildren. 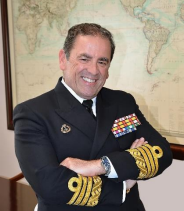