A- A  A+
News from EUROMARFOR
Back to previous page
September 18, 2013
Speech of Admiral Santiago BOLÃBAR PIÃ‘EIRO assuming COMEUROMARFOR responsability

Firstly I would like to thank Admiral COINDREAU for his kind words, and all of you for being here today attending this EUROMARFOR Change of Command Ceremony.

Back in 1995, when France, Italy, Portugal and Spain created the European Maritime Force, the aim was to support the so called European Security and Defence Identity in cooperation with NATO and other allied organizations. The force’s role would be to conduct crisis management and other operational tasks including humanitarian aid, disaster relief and rescue operations, peacekeeping and peacemaking.

The first COMEUROMARFOR was appointed on the second of October 1995 and the first activation of the force took place during the exercise EOLO in April 1996, only less than one year after the approval of the Constitutive Document.

On assuming the command of the EUROMARFOR, today more than fifteen years later, the force is fully grown-up and, thanks to the efforts of the Admiral Coindreau, Admiral Magne and all of his predecessors, it has consolidated and strengthened its internal organisation, demonstrating to be a common maritime instrument fully able to meet our nations’ requests within the international arena, dedicated in priority to EU and available to NATO, the UN or other international organizations.

In fact, by participation at high operational level, within complex scenarios, in different theatres (Operation Coherent Behaviour in Eastern Mediterranean, in cooperation with the NATO Operation Active Endeavour; Operation Enduring Freedom in Indian Ocean, to contribute to the global fight against the international terrorism; Operation MTF UNIFIL, off the Lebanese coast, under the UN aegis; and, until very recently, the contribution to Operation ATALANTA during 20 months to fight piracy and armed robbery, off the Somali coast in the Indian Ocean; by this involvement, the EUROMARFOR has demonstrated to be a very useful tool allowing our nations and, through them, to the whole European community countries, to assume a consistent role in providing a valid contribution in the international crisis management field.

The EUROMARFOR real world operation commitment of the latest years has been accompanied by numerous exercises and other activities including Cooperation with South Mediterranean countries. This confirms the role of EUROMARFOR as a dialogue and mutual confidence building tool, among all neighbouring countries of the Mediterranean Sea, contributing to strengthen the Cooperative Security in our surrounds.

The development of the Concept for the contribution of the EUROMARFOR to Maritime Security Operations, which is short to be assumed by our organization, gives continuity and opens new fields of cooperation aimed at maintaining a safe and secure maritime environment, in support our nations’ and the EU maritime interests.

Today I am proud to take command of EUROMARFOR. I can assure you that, for the next two years, I will be totally committed, in following the path of my predecessors, to carry out the directives of the EUROFORCES Interministerial Committee, to steer this boat to a safe port.

On this occasion, I would like to express my special thanks to my predecessors, the admiral COINDREAU and the admiral MAGNE, for the valuable work done through the contribution to the Real World Operation ATALANTA and to other tasks as updating the EUROMARFOR documentation of the new EUROFORCES structure after the closure of the EUROFOR HQ or developing the Concept for the contribution to Maritime Security Operations.

The present international scenario seems to stimulate EUROMARFOR to continue with its contribution in the crisis management and, upon decision from our nations, the possible extension of the contribution, under European Union aegis, to the Operation ATALANTA, will continue to provide opportunities, for the force, to confirm its effective capabilities and potentialities.

I wish, therefore, on assuming the command of EUROMARFOR, to express my own personal efforts and those of my staff, heavily relying on the contribution of the permanent cell of EUROMARFOR, which just completed its settlement in my HQ, to achieve two goals: First, “have the force prepared to contribute to Real World Operations, seeking its involvement there where our nations deemed necessary”; second, “continue seeking ways of cooperation in the pursue of EMF nations maritime interests, including those related with the EU community”.

I wish to conclude by expressing once again my sincere thanks to all those present for attending today’s ceremony.

Ladies and gentlemen, thank you for your attention. 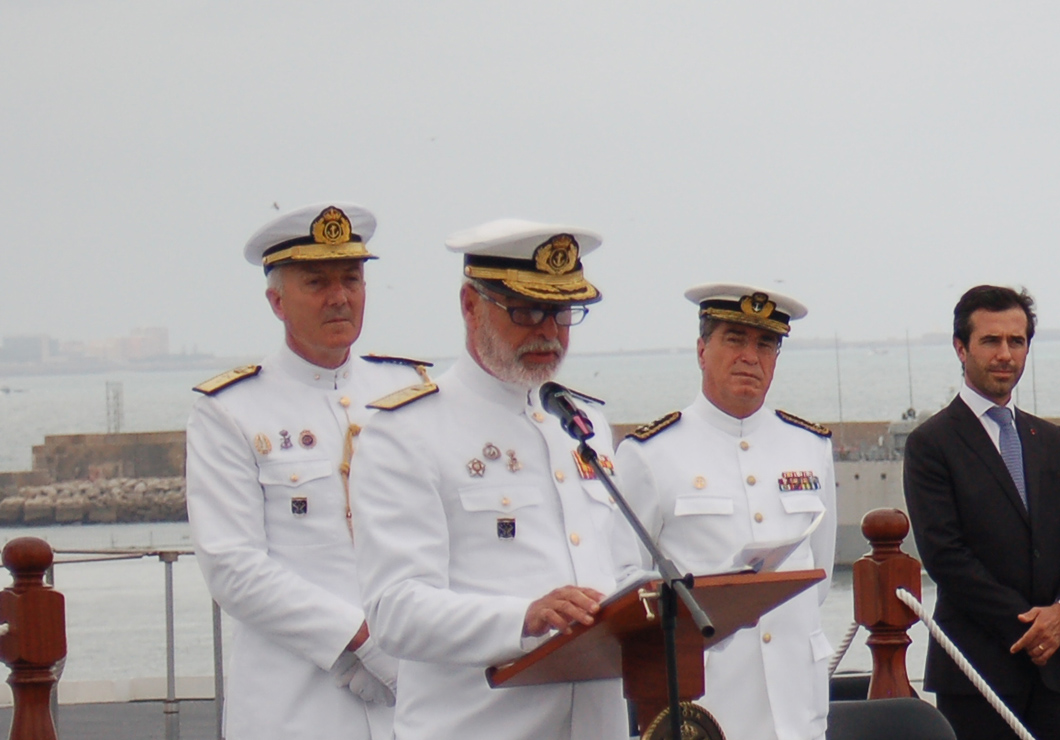