A- A  A+
News from EUROMARFOR
Back to previous page
May 15, 2015
COMEUROMARFOR speech on the 20th Anniversary

Today we gathered here to celebrate the twenty years of existence of the European Maritime Force. Before I start my speech on what were the main achievements of EUROMARFOR during all these years, I would like to thank all of you, civilian and military authorities, and especially the Chiefs of Fleet of France, Italy and Portugal, since their presence really honors this ceremony. I would also like to express a warm welcome to the former COMEUROMARFORs, as their attendance underlines the continuity of this journey.

It would be long to mention all the activations and EUROMARFOR’s successes achieved during all these years, thanks to the commitment and collaboration of our four Nations. Allow me to highlight, instead, some key events since the creation of this force in 1995, and to sum up with a quick glance on what is our vision for the future.

Following the Petersberg Declaration, issued by the Western European Union in June 1992, the governments of our four nations, understanding the importance of the message sent with this Declaration, signed the EUROMARFOR Constitutive document in Lisbon, on 15 May 1995.

On 2 October 1995, with the appointment of the Spanish Admiral MANUEL ACEDO MANTEOLA (ALFLOT at the time) as the first COMEUROMARFOR, the existence of the Force was finally materialized, and as soon as April 1996 its first activation, for exercise EOLO 96, proved the feasibility and flexibility of the Force. At this point, I would like to express my deep feeling for Admiral ACEDO, who is no longer among us, and whose contribution to build-up EUROMARFOR, starting from the scratch, was paramount.

In 2001, two (2) officers from Greece and Turkey respectively, integrated in the EUROMARFOR Permanent Cell as observers.

As the years were passing by, the force was activated several times for participating in exercises, but also to be involved in Real World Operations.

The first Real World Operation was “Operation Coherent Behaviour” in eastern Mediterranean in 2002, where the EUROMARFOR was in close cooperation with NATO in the frame of “Operation Active Endeavour”.

Following this Operation another challenge was taken up by EUROMARFOR in 2003, with its participation in “Operation Resolute Behaviour”, in the Indian Ocean, in support of the International Coalition’s “Operation Enduring Freedom” and gradually embedded into it between 2003 and 2005.

EUROMARFOR participated also in “Operation UNIFIL”, off the coasts of Lebanon, between 2008 and 2009, under the mandate of UN. Once again EMF demonstrated its flexibility and its capacity of acting under the aegis of different Organizations.

The latest activation of EUROMARFOR for Operations took place in December 2011, in order to participate in the European Unions’ “Operation ATALANTA” in the Indian Ocean. This activation, excluding some short intervals, has already lasted for 30 months and is still ongoing, with a foresight for at least 12 months more.

For the time being, the main task orientations of the EUROMARFOR are the contribution to the Common Security and Defense Policy of European Union and the cooperation with the African countries of Mediterranean Dialogue and 5+5 initiatives. They have been addressed by the participation in Operations and the execution of a demanding program of exercises.

Regarding the cooperation with selected African countries, a remarkable effort has been done in order to organize common exercises, resulting in five port visits and exercises in common with Tunisia, Algeria and Morocco.

In this framework, EUROMARFOR has been included in the EU Force Catalogue, being a deployable high readiness maritime headquarters, and it has also been incorporated into the Maritime Rapid Response Database.

EUROMARFOR structure is based on the concept of a non-standing but pre-structured force, which makes it very flexible and efficient. These characteristics are very important in the present days, given the current difficult financial situation, as it provides alternatives for operational planning and, at the same time, it keeps the costs at a reasonable level.

Looking into the future, I believe that EUROMARFOR could play a key role in EU naval forces build up process, thanks to almost six years of accumulated experience in operations with most of EU units and multinational staffs. EUROMARFOR is a real European naval laboratory to constitute a pool of sailors able to work together in this framework. That is the reason why I would like to finish with some words on the key actors of this process, the staff and crews of our ships.

Whatever the difficulties to build a European Security and Defense Policy are, be sure that the build-up of a coherent European naval capability is mainly in your hands. We belong to four of the main European naval Nations, which were pioneers in the maritime domain all over the world, and share a glorious history behind. Being a sailor, just like you, I am convinced that, as for every demanding project, this one relies on our willingness and our cohesion.

Focusing in the upcoming Exercise, the SPANISH MINEX 15, I am proud to commend all of you for the good work you performed to have this ceremony prepared, while involved in a demanding multinational exercise which is about to start.

As it has been agreed by the Interministerial Committee, I declare the EUROMARFOR activated under the command of Captain JAIME GOLMAYO HAFNER, designated as COMGRUEUROMARFOR, to whom I delegate the Tactical Command of the force during the Exercise SPANISH MINEX 15. 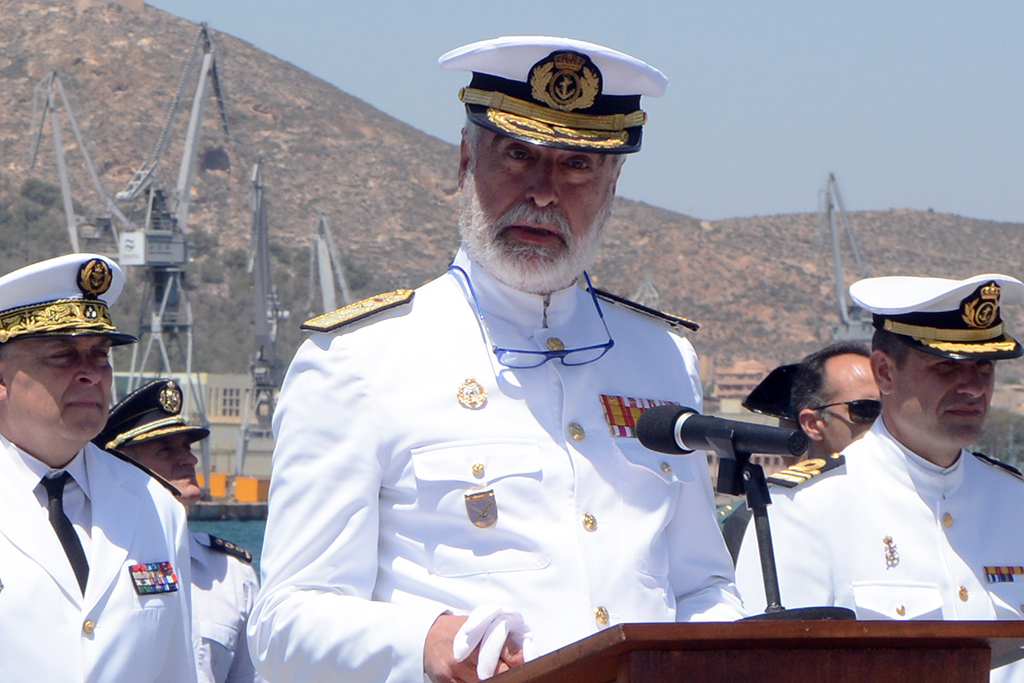