A- A  A+
Back to previous page
History

In June 1992, with the Petersberg’s Declaration, the EU began the process of revising its structure to adapt itself to a changing world and for this reason to update the list of potential missions that could be assumed. Consequently, it was the requirement to identify the Forces necessary to carry out the new missions that came into force. The governments of France, Italy, Portugal and Spain, were very quick to process and assess the importance of the message sent with the Petersberg’s Declaration. In fact, as soon as the following September, during a meeting of ministers, these four countries stated their willingness to create a Multinational Maritime Force. This was the starting point of the work that would later lead to the signing of the European Maritime Force (EUROMARFOR/EMF) Constitutive document in Lisbon on 15 May 1995. On 2 October 1995, with the appointment of the Spanish Admiral ACEDO MANTEOLA (then ALFLOT) as the first Commander of the EUROMARFOR (COMEUROMARFOR), the existence of the Force was finally materialized.

The feasibility and flexibility of the Force was proven by its first activation, during exercise EOLO 96 (April 96), only after one year from the signing of the Constitutive Document, and less than six months after the first COMEUROMARFOR assumed Command. As the years were passing by, more and more time was spent at sea in Operations or Exercises. During this period, the force was activated several times to take part in the so-called “Real World Operations – RWO”.

Upon the completion of this first participation in RWO, another challenge was taken up by EMF and the force activated to take part in a new RWO. Thus, in 2003, EMF participated in Operation “RESOLUTE BEHAVIOR” in the Indian Ocean, in support of the International Coalition (CMF) Counter terrorism Operation “ENDURING FREEDOM”, having joined this mission between 2003 and 2005. The participation of EMF in an Operation like this, demonstrated the EMF’s Nations cohesion, determination and their commitment to fight together with the international community against terrorism.

Then, between 2008 and 2009, with Operation “IMPARTIAL BEHAVIOR”, EUROMARFOR supported also operation “UNIFIL”, in vicinity of Lebanon, under the aegis of UN. During this activation, the EMF at sea Commander acted as CTF 448, the UNIFIL’s Operational Commander. Once again, EMF demonstrated its flexibility and its capacity of acting under the aegis of different Organizations. In fact, it was a historical milestone not only for EMF, but also for the UN, because it was the first UN’s naval operation.

From December 2011 until March 2016, EUROMARFOR returned to the Indian Ocean in order to participate in the European Union’s Counter Piracy Operation “ATALANTA”. During this period, EUROMARFOR was activated 4 times, for nine complete rotations, and for each activation, the EMF at sea Commander acted as CTF 475, the ATALANTA’s Tactical Commander. The first activation in 2011 was the first one under EU military command.

The latest activation of EUROMARFOR took place from May to June 2020, where for the first time an EMF Task Group (EMF TG) acted under Operational Control (OPCON) of COM MARCOM, while supporting NATO’s Operation “SEA GUARDIAN”, in the Central Mediterranean.

During these 27 years of existence of EUROMARFOR, both by participating in Real Operations, but also through a demanding program of operational exercises, organized by the Navies of the member countries, or organized by other Organizations (NATO, EU ...) or even with the Southern Mediterranean and West African countries, EMF visibility and international recognition has increased significantly.

EUROMARFOR has proved to be an efficient initiative, mainly because it has a very flexible structure, which is based on the concept of a non-standing but pre structured force. 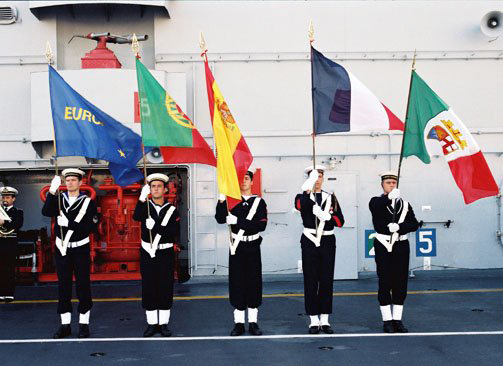